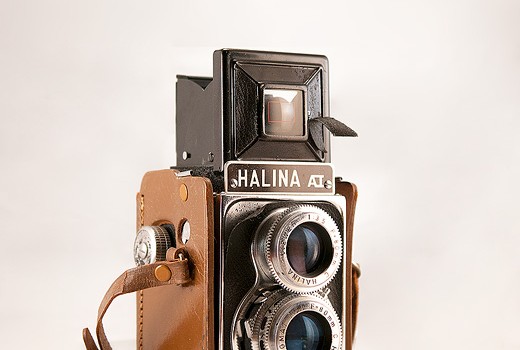 The Halina A1 was a TLR made in Hong-Kong by Haking, based on the same body as the more basic Halina Prefect.

Halina cameras were made, to put it politely, to a price by Haking out of Hong Kong . Of all the Halina models this Twin Lens Reflex is one of their better efforts but quality never stood in the way of price, the lens in particular being rather dubious. The basic shell is shared amongst several Haking models from the focus free Halina Prefect, Kinoflex, Star-Lite, Sunscope, Votar Flex or Wales Reflex.

However the Halina AI is a true Twin Lens Reflex with ground glass screen, fully shaded hood and magnifier. The two blade leaf shutter is of Haking origin and fairly simple, speed control is poor but the action is light and vibration free. When it arrived the camera was in poor condition and a strip down revealed extensive water damage to the shutter, the return spring had oxidized to powder and the shutter leaves rusted through.

An interesting repair scheme was devised that entailed filling the holes in the shutter leaves with thick black paint, allowing to harden then sanding and polishing back. A new shutter leaf return spring was wound from salvaged photocopier springs! Then to really give the old Halina a birthday, the entire shell was stripped and repainted.

The Twin Lens Reflex camera was adopted by a significant proportion of camera makers as there was a perception amongst the public that such cameras represented an elite, and there is always a market for something that looks the part without actually being able to back up it’s visual claims.